The Spring 2019 fashion shows have just begun. A fashion week frenzy, which starts in New York and ends in Paris, is a preview of what’s to come in all things sartorial from clothing, to shoes, and hair. Fashion week just ended here in New York, and we will recap some of the bigger hair trends from the top designers.

Something we have talked about in past posts, the headscarf was seen in some of the more prominent shows. The simple scarf can be tied up on the head to create a chic, but effortless look. It can be your best friend on a bad hair day. Model Kaia Gerber, daughter to Cindy Crawford, walked down the Tom Ford runway in a 70’s inspired headscarf which was finished with a slightly, messy bun created by hair stylist Orlando Pita. We saw a more rock-n-roll version via Axl Rose at Alexander Wang, and more 60s lady like version at Tibi. The headscarf is nothing new, it has been around for years, but it hasn’t had the same appeal here in the U.S as it has in other countries. With more designers showcasing the look, perhaps this season, you, too, can try one of these styles.

One of the more creative looks was the surfer girl, or simply the half wet look. We saw many versions of this look at shows such as Chromat where we saw wet fingers waves framing the face, R13 had its own interpretation with hat head waves circa 90s grunge, and at Hellessy where TRESemme’s stylist, Justine Marjan, created her signature half wet waves. But the most notable of these looks was at Calvin Klein, designed by former Dior designer Raf Simons. Perhaps it was a little more literal, or maybe it was a little more organic, but the rolling waves seen at the Calvin Klein was a show stopper and scene stealer. Created by stylist, Guido Palau, the models walked down the runway as if just walking out of the ocean, with the bottom half of the hair soaking wet. Although, this Calvin Klein look may be hard to pull off as is, but with some creativity, I am sure there will be many variations next summer.

Yes, there were many loose curls and lots of flowing hair. But more than these, we saw creative and DIY styles with pulled back and tied hair. From feminine to architectural, the basic pony tail has been updated and revamped. At the Area show, models walked down the runway with very high buns with a cascade of hair falling to the side. Adeam’s models had their hair pulled back with a vertical bow-tie made from their hair. There were shiny long braids at Cushnie and Oaks. Ulla Johnson’s bohemian clothes were supported by hair stylist Esther Langham who slicked the models’s hair back with gel and created top and bottom knots finished off with a smooth ponytail that was held in place with an ornate elastic band.

Overall, it seems like the hair was very fun, creative, and less manicured than the perfection we have come to expect. There was lots of experimentation. Rules seem to have been broken during these runway shows and a new order of hair is on the horizon. It’s like “the big thing now” is finding your own unique way of doing things. It’s all about self-exploration and discovery. Who says you need to have big, sexy hair? Who says you need to have a corporate bob?  Does it matter if your partner doesn’t like curls? “You can go your own way.”

Stay tuned for updates from the London, Milan and Paris shows (respectively). 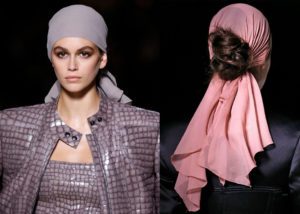 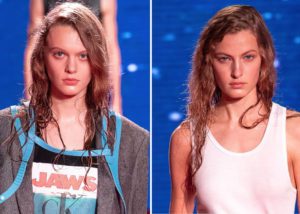 Join The Concrete Family! PLEASE CHOOSE your preferred location from the drop-down.